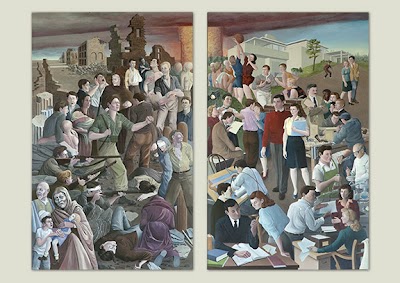 Sara Griffin was selected as one of the painters for the recreation project. Working with Fred Ross, Fred Willar and Amy Ash, Sarah devoted six months to the project.

“The recreation of this Fred Ross Mural has been an amazing journey, one that has been monumental, not only in scale (which is over 300 square feet), but also the historical aspect of the work that commemorates the fallen soldiers in WWII, and of course working with the legendary force that we know and love, Fred Ross. The painting team was very conscious of recreating the work to the best of our abilities in order to adequately pay tribute to all aspects of this project. 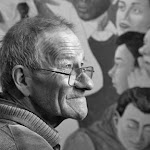 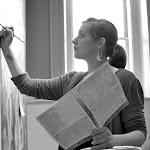 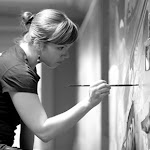 It has certainly been an honour to be a part of the Mural recreation, and it is no doubt that all members of the painting team have not only become stronger painters, but also more aware of the history of mural and portrait painting, and New Brunswick’s art history. Knowing that Fred Ross used the $700 he made of the creation of the original mural to travel to Mexico where he met Diego Rivera really heightens the intrigue of the story surrounding this work of art, and places everyone involved within that exciting history, and for that we feel very privileged. 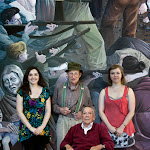 One of the most important aspects of this project for me has been getting to know provincial art icons, such as Fred Ross, Fred Willar, John Leroux, and William Forrestall. Their support, mentorship and resourcefulness has provided me an education all unto itself. Many thanks are owed to them.”