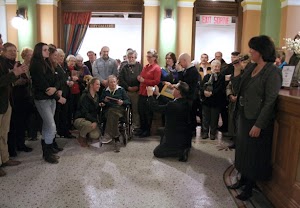 Kathryn McCarroll announces the increase in value of the Fred Ross Scholarship during a tribute to the restoration of a lost 1948 mural. The 2012 scholarship winner, Alison Willms, was honoured by the foundation for her continuing excellence in her studies at Mount Allison University at the Saint John Arts Centre on January 17.

Fred Ross presents a copy of Redeemed: Restoring the Lost Fred Ross Mural to Alison Willms, a current SHMF scholarship winner. Mr. Ross, long honoured by the foundation for his mentor-ship of young artists, continues to encourage youth in the pursuit of excellence. 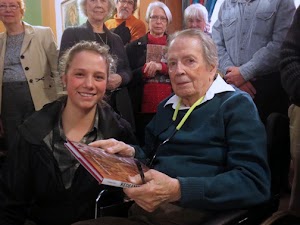 In 2013, the Foundation increased the value of the Fred Ross Scholarship to $8000 and continues to work to support its scholars within the artistic community.

Launched at Saint John Arts Centre, Redeemed chronicles the unique restoration project of the 1948 mural The Destruction of War & Rebuilding the World through Education, a major Sheila Hugh Mackay Foundation project. The book is a series of critical essays on this early work of Fred Ross and a comprehensive photographic record of the restoration by James Wilson.