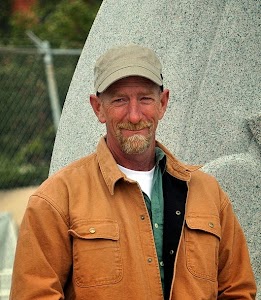 The City of Fredericton announced artist James Boyd of Hampton has been selected to create a sculpture for the Fredericton Botanic Garden. The jury of three decided on his proposal called ‘Rhodo’ in reference to the Rhododendron garden, one of the main attractions of the Botanic Garden located at the west end of Odell Park.

Boyd was shortlisted from a group of 15 New Brunswick artists who responded to the City’s call for design submissions in November. He visited the site this winter and was instantly attracted to the Rhododendrons.
“I had never seen the Rhododendron in the winter and I was surprised that they had beautiful buds and leaves, even in January,” said Boyd. “I knew immediately that I wanted to create my sculpture to be situated near these beautiful plants.”

The piece will be created from a large granite boulder and will be 5 – 6 feet tall. Featuring three sets of leaves starting at the base, the top of the sculpture will depict a Rhododendron bud emerging from the leaves.
Funding for the $15,000 commission is coming from a $10,000 Special Project Grant awarded by The Sheila Hugh Mckay Foundation. The award, announced last year, is intended to facilitate growth in the visual arts of New Brunswick. The balance of the commission and associated costs are coming from the City. It is expected that the sculpture will be installed in August.

“We are so very pleased and excited to be the beneficiary of the sculpture through the generous grant from the Sheila Hugh McKay Foundation and topped up by the City,” said Wendy Bourque, past president of the Fredericton Botanic Garden Association. “We are eagerly anticipating the installation of James Boyd’s sculpture.”

Saint John-born Boyd lives in Hampton. He has a BFA with a Major in Sculpture from the Nova Scotia College of Art and Design and a BEd from UNB Fredericton. His sculptures have appeared in several exhibitions and his work is in many private collections.

Boyd also has participated in four international sculpture symposia, including one in Istanbul, Turkey in 2013. His sculpture titled Peace Wing installed in Hampton will join two other of his sculptures as part of the Canada/US International Sculpture Trail. In 2011 Jim’s sculpture titled Nature’s Grace was created for the town of Eastport, Maine and in 2012 during Sculpture Saint John’s first symposium he sculpted Water Stone for the town of St. George. When he is not sculpting Boyd works fulltime as a teacher at Hampton High School.

The Fredericton Botanic Garden Association (FBGA) was formed in 1989 by a group of local residents inspired by their common passion for botany and horticulture with a mission to establish a Botanic Garden in Fredericton. One year later the City dedicated a property at the west end of Odell Park for the gardens. The FBGA and the City have jointly developed and maintained the space through a Local Improvement Association incorporated in 1992.