NB Foundation for the Arts

In 2005, the Board of Directors of the SHMF invested in a five year Arts and Heritage Stabilization Program spearheaded by the New Brunswick Foundation for the Arts. Aimed at providing stability to arts organizations, this fund allowed for fiscal and governance review and financial aid for 10 organizations … Read More

Founded by a dedicated team of volunteers in 2002, the Saint John Arts Centre has developed into a vibrant multidisciplinary venue serving the Greater Saint John area. Sheila Mackay provided early funding to the fledgling organization, believing in the need and value of a centre for artistic expression. Notable projects: the Graphic Design Studio and the Pottery Studio … Read more 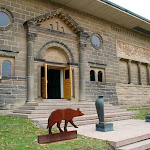 The Owens Art Gallery is the oldest university art gallery in Canada. Since its opening in 1895, the gallery has served Mount Allison University as an integral component of liberal arts education and has as developed into a local, national and international visual arts institution of excellence. Some notable projects: From Bermuda Palms to Northern Pines and Studio 360º … Read More