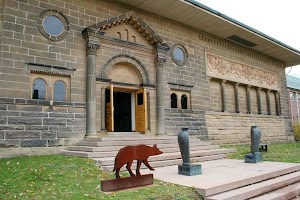 The Owens Art Gallery is the oldest university art gallery in Canada. Since its opening in 1895, the gallery has served Mount Allison University as an integral component of liberal arts education and has as developed into a local, national and international visual arts institution of excellence. The Sheila Hugh Mackay Foundation commends the work of the Owens Art Gallery and is proud of two special projects grants that have contributed to its history of exceptional programming.

From Bermuda Palms to Northern Pines

A 2001 special project grant supported a travelling exhibition of masterworks from the Bermuda. Including the works of Canadian artists Jack Bush, Frank Allison and John Lyman, this exhibition entitled “From Bermuda Palms to Northern Pines” travelled from Bermuda to Boston, Massachusetts and then to the Owens Art Gallery in Sackville, New Brunswick.

In 2012, Sheila Hugh Mackay Foundation was pleased to support the ongoing educational programming offered at the gallery by providing funding for an interactive new media project “Studio 360◦“ which was produced by Owens Art Gallery in partnership with Fawcett Media Centre. Under the leadership of Owens Art Gallery director, Gemey Kelly an online video archive that allows for virtual access to studio spaces of working artists was created. It presents interactive panoramic photographs of six Sackville artists’s studios as well as a series of interviews that focus on the working context of artistic life. The filming process incorporated a mentorship program in videography.