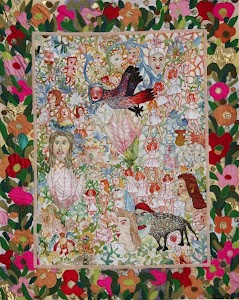 The gallery is pleased to present the work of two remarkable artists, Anna Torma and Balint Zsako. Hungarian Canadians, both are internationally renowned. One lives and works in Green Bay (New Brunswick), the other in New York. The first is the mother of the second.

Anna Torma focuses in his work on needlework. It is part of a post-feminist current (Judy Chicago) that redefines abilities traditionally associated with women in Western culture.
The artist offers us a fantastic world, both mystical and playful, animated characters, words and flowers, animals and monsters. The image of the garden plays a major place and refers both to the original garden that those she takes pleasure to visit or maintain. His personal memories and daily life feeds his creative inspiration; embroidering, Anna Torma puts order into the chaos of his memory. Any idea of ​​grid or rationality is excluded, however, because its sensitivity notes in every sense of spontaneity and candor of mind that characterize raw art and visionary art. His works have been admired across Canada and the United States, China and in many European capitals (see CV).

Watercolors Balint Zsako remind us of the art of illumination and Indian miniatures and in the art of Cape Dorset artists. His narrative works are inspired by mythological archetypes that both sexual and family. The use of physical distortion allows it to draw parallels between different psychological states. As for the mechanical appendages, they return to the confrontational nature of the relationship between biological and industrial. These narratives open book, dark and complex, are animated with bright colors and endless details that add an additional level of interpretation between the visual and the conceptual.

In Montreal, we discovered the work of Balint Zsako in the Paper Fair (12/10/14), and the opportunity to “Diabolique” (Galerie de l’UQAM) and “Fluid Borders” (Pierre-François Ouellette art contemporain). His works were exhibited in New York and Berlin recently; currently presented in Melbourne, they soon will be in Paris and Salzburg.