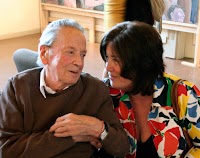 The official unveiling of the re-creation of the 1948 War Memorial Mural by New Brunswick artist Fred Ross and the presentation of the 2011 Fred Ross Scholarship to Alex Francheville will take place on Monday June 27th at 4 pm.

Under the direction of Mr. Ross, artists Amy Ash, Sarah Griffin and Fred Willar have recreated the 20’ by 20’ mural originally commissioned to honour the Fredericton High School fallen of World War II.  It will be installed in The Long Hall of the Richard J. Currie Centre on UNB campus, a fitting place for an artwork championing the hope of peace and prosperity through culture and education.

The Sheila Hugh Mackay Foundation’s investment of $50,000 in this re-creation project is a commitment to the power and importance of public art. 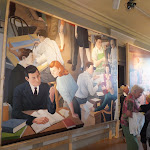 Panel of the Fred Ross Mural 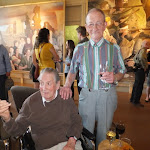 Artists Fred Ross and Fred Willar express gratification that the mural’s theme continues to have resonance for new generations.