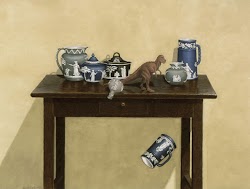 The Sheila Hugh Mackay Foundation provides independent juries to review all nominations and applications for its various awards programs. The Board of Directors wishes to express gratitude to the following arts professionals who assisted in the 2011 selection process for the Strathbutler and the Nel Oudemans Awards

Kevin Rice is the director of Confederation Centre Art Gallery in Charlottetown, Prince Edward Island He holds a BFA with distinction from Mount Allison University and has completed national certification in Museum and Art Gallery Management with the Banff Centre for the Arts. Rice has extensive experience in curation, collections management, metadata research and arts programming. Currently he serves on the Collections Issues Committee of the Canadian Art Museum Directors. Active in a host of community based cultural organizations, he brings a broad spectrum of visual arts knowledge to the Strathbutler adjudication process. Rice has served on the Board of Directors of the Community Museums Association, Archives P.E.I., ArtsAtlantic magazine, Printmakers Council of P.E.I., and the Great George Street artist run gallery.

As Director of the Maine Arts Commission, Donna McNeil is responsible for overseeing the cultural well being of the State of Maine through support for artists and arts organizations. She joined the Maine Arts Commission staff in 2003 as Contemporary Art and Public Art Associate where she oversaw the advancement of artists through advocacy, grants, professional development and the percent for art program. Donna sits on the board of the New England Foundation for the Arts and the Maine Film Commission, the Maine-Aomori Sister City Council and the Governors Quality of Place Council. She has served as a juror for the National Endowment for the Arts and worked extensively with Creative Capital Foundation and is an active lobbyist for the arts in Maine and Washington DC. She holds a BFA in Painting from Syracuse University and a MLA in Art History from Harvard University. Donna has devoted a lifetime to the arts in both the for-profit and nonprofit sectors, holding directorial and curatorial positions in galleries, museums and the performing arts.

Hannah Claus is an installation artist who has exhibited her work throughout Canada, as well as in Mexico, Chile, Switzerland and Germany. In 1997, she was one of the delegates representing New Brunswick in the artistic events of the IIIe Jeux de la francophonie in Madagascar. Her most recent solo exhibition, nephology, was at the Confederation Centre Art Gallery in Charlottetown, PEI in 2010. She holds a graduate degree in Studio Art from Concordia University in Montreal and a diploma with honours from the Ontario College of Art and Design in Toronto. She has received various grants and awards throughout her artistic practice; from 2006 to 2008, Claus was the Artistic Director of the artist-run centre Axenéo-7 centre d’artistes in Gatineau, Quebec. This fall she will be teaching a course in contemporary aboriginal art at Concordia University and is currently working on a new installation for a group exhibition at the Museum of Art and Design in New York City in 2012.

George Fry is an artist, arts advocate and esteemed educator. Classically trained in England, he has worked in film, theatre and graphic design before immigrating to Canada to accept a position teaching art in Saint John. Fry became provincial co-ordinator of Art Education as well as director of the New Brunswick College of Craft and Design. An active arts advocate, he is noted for his involvement in the Canada Crafts Council. A master mask maker of international renown, he has extensive experience in set and costume design. His most recent work of writing and illustrating one of a kind books has been exhibited in a travelling exhibition “Beyond Words” In 1994, Fry was awarded the prestigious Province of New Brunswick Award of Excellence for his work in furthering the recognition of New Brunswick crafts. In 2003 Fry received a Queen Elizabeth Golden Jubilee medal for his service to Canada.